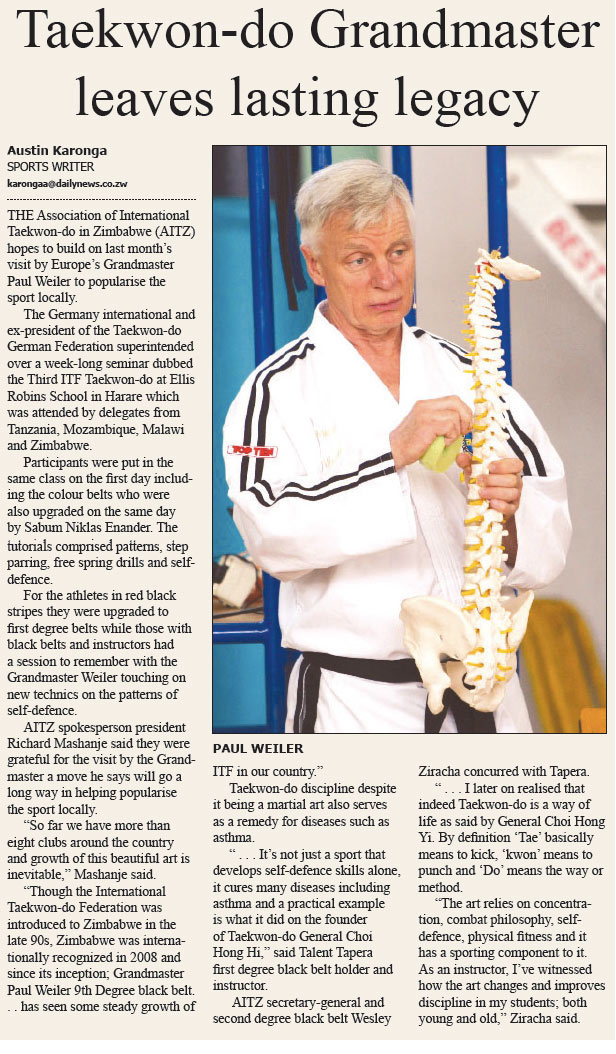 Austin Karonga
SPORTS WRITER
karongaa@dailynews.co.zw
THE Association of International Taekwon-do in Zimbabwe (AITZ) hopes to build on last month’s visit by Europe’s Grandmaster Paul Weiler to popularise the sport locally.
The Germany international and ex-president of the Taekwon-do German Federation superintended over a week-long seminar dubbed the Third ITF Taekwon-do at Ellis Robins School in Harare which was attended by delegates from Tanzania, Mozambique, Malawi and Zimbabwe.
Participants were put in the same class on the first day including the colour belts who were also upgraded on the same day by Sabum Niklas Enander. The tutorials comprised patterns, step sparring, free spring drills and selfdefence.
For the athletes in red black stripes they were upgraded to first degree belts while those with black belts and instructors had a session to remember with the Grandmaster Weiler touching on new technics on the patterns of self-defence.
AITZ spokesperson president Richard Mashanje said they were grateful for the visit by the Grandmaster, a move he says will go a long way in helping popularise the sport locally.
“So far we have more than eight clubs around the country and growth of this beautiful art is inevitable,” Mashanje said.

“Though the International Taekwon-do Federation was introduced to Zimbabwe in the late 90s, Zimbabwe was internationally recognized in 2008 and since its inception; Grandmaster Paul Weiler 9th Degree black belt. . . has seen some steady growth of ITF in our country.” Taekwon-do discipline despite it being a martial art also serves as a remedy for diseases such as asthma.
“ . . . It’s not just a sport that develops self-defence skills alone, it cures many diseases including asthma and a practical example is what it did on the founder of Taekwon-do General Choi Hong Hi,” said Talent Tapera, first degree black belt holder and instructor.
AITZ secretary-general and second degree black belt Wesley Ziracha concurred with Tapera. “ . . . I later on realised that indeed Taekwon-do is a way of life as said by General Choi Hong Hi. By definition ‘Tae’ basically means to kick, ‘kwon’ means to punch and ‘Do’ means the way or method.
“The art relies on concentration, combat philosophy, selfdefence, physical fitness and it has a sporting component to it. As an instructor, I’ve witnessed how the art changes and improves discipline in my students; both young and old,” Ziracha said.